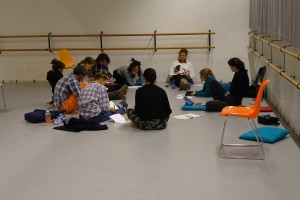 END_OF_DOCUMENT_TOKEN_TO_BE_REPLACED

After the words stopped their dances, some other noise, not exactly poetry, not exactly music, filled the air. It was a kind of clawing sound: as if the words themselves were shimmying up a brick vine-covered edifice whose structure the people sensed but could not see.